Most experts agree that email will keep growing as an effective marketing tool. There are several studies on the effectiveness of email marketing. Below is a great example of how email marketing compares to social media.

When you compare email marketing to social media, you can see that email is considerably more effective. This is illustrated in the chart below from optinmonster.com. This doesn’t mean that social media isn’t important. However, it doesn’t have the same level of effectiveness as email marketing campaigns. 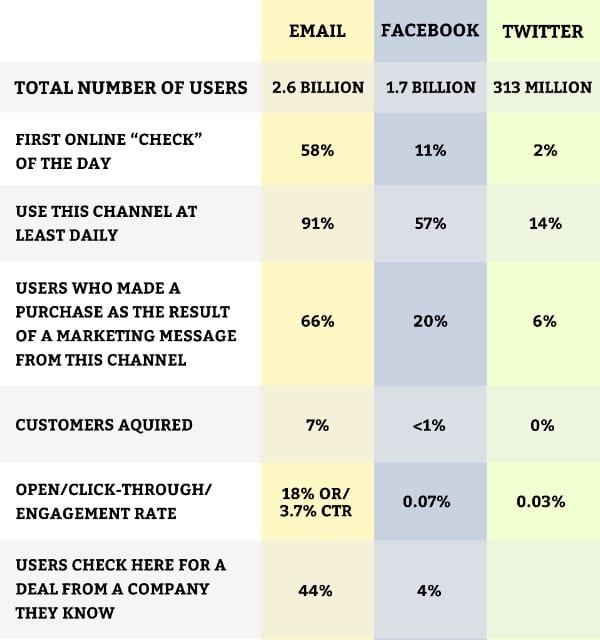 Once people are convinced that email marketing is worthwhile, they usually ask two questions.

Once you decide to start email marketing, you might ask, “How do I generate an email list?”

Most of you probably know that you can purchase email lists. If you didn’t know that, feel free to just forget that information, it is usually not a good idea. The most effective campaign lists are composed of people who join voluntarily, which is how you build organic email lists.

The new buzz term for building your list organically is known as permission marketing. Seth Godin coined this concept in his best-selling book Permission Marketing. Godin says that permission marketing is “the privilege (not the right) of delivering anticipated, personal and relevant messages to people who actually want to get them. It recognizes the new power of the best consumers to ignore marketing. It realizes that treating people with respect is the best way to earn their attention.”

In the following excerpt from a case study through convinceandcovert.com, Gretchen Roberts from Smoky Labs detailed a recent test she conducted. It illustrates how open rates are considerably better with an organic email list.

“I recently ran two email campaigns that were structured exactly the same, except one was a cold, purchased email list, and the other was sent to an organically-grown email list that normally receives a weekly newsletter.” The results? You guessed it: a complete failure for the cold list.

“The cold campaign was a complete flop,” stated Roberts. “Not only was it expensive to purchase the list, but the open rate hovered around 1 percent for a supposedly highly-qualified list.” Of course, the organic campaign received a considerably higher success rate. “Open rates were over 50%.”

It makes perfect sense that if you send content to people that actually want to receive it, your chances of them making a purchase is much higher than if they have no interest in what you are selling.

#2. What should we talk about in our emails?

Other than email-marketing staples like sales or other promotions (who doesn’t love these), you should focus on topics that are authentic to your brand. If you have built the right list, they will most likely get value out of your content! Pair your copy with sharp imagery to help grab your audience’s attention. Also take time to ensure that your email layout works for both desktop and mobile usage. More people check their emails on their phones than on PC’s or web clients. In fact, according to Andrew Gazdecki of campaignmonitor.com,  “If an email displays poorly, no matter how good the content is, it’s likely to be deleted in under three seconds (in >70% of cases).”

As you may have gathered by now, email marketing done right definitely delivers a great return on your investment. This is not a trend that will disappear any time soon. If you are not currently running email-marketing campaigns, today is the best day to start! We LOVE helping people create email campaigns because we know they work. Contact us if you would like to start making more money in your business.